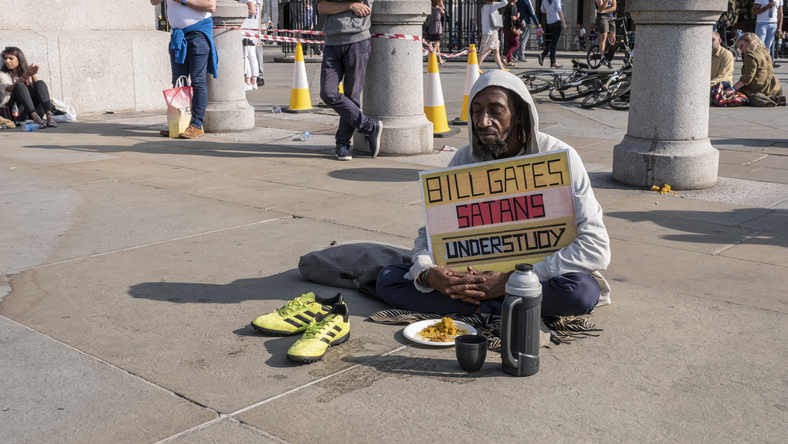 Is the Coronavirus a Hoax?

Well the 2 Swine flu pandemics in 1976 and 2009 were definitely hoaxes, orchestrated by corrupt insiders. In the 1976 Swine Flu Hoax the evidence for an epidemic was not just shaky, it was non-existent. The panic was orchestrated by corrupt insiders at the CDC. Strange how the unelected Vice President at the time was Nelson Rockefeller and there is a picture of Gerald “can’t walk and chew gum at the same time” Ford being innoculated but no picture of Nelson getting the jab. While we are on the subject, why is there no picture of Fauci or Gates being vaccinated against Covid-19. We therefore have to assume that they have avoided it – especially as pictures of them being injected might go some way to dispel conspiracy theories. So what do they know that they aren’t telling us?

In the 2009 Swine flu hoax
was there actually an infectious agent? Well if there was it was a very mild one. Some people had respiratory illnesses that year but was it the Swine flu or just the standard seasonal flu? The pandemic scare was orchestrated by corrupt insiders at the WHO with connections to the drug companies that made the vaccines.

In the 1918 Spanish Flu all the evidence points to the pandemic being started by a Rockefeller vaccine made in horses. Probably a “gain of function” species jump of the horse upper respiratory disease “Strangles”. According to many studies on preserved lung samples of victims, the people died of bacterial pneumonia. Cue Dr. Fauci pushing an absurd narrative that the disease was caused by “virus/bacteria co-pathogens” to throw us off the scent. There is no evidence that it was a viral pandemic.

Is the Coronavirus crisis a conspiracy? Yes. Of course it is. How dumb do they think we are? How can it not be a conspiracy when there are numerous studies which show that

Vitamin d deficiency is implicated in every chronic disease (see the end of my  video: The 2 natural “vaccines” which kill covid-19 and any other virus. )

The simple expedient of giving every citizen a year’s supply of vitamin d, 5,000 i.u.’s for healthy adults, 10,000 i.u.’s for the obese and those with co-morbidities would have
killed the virus. Is this what the Chinese are doing and it’s not being reported here? The people who own medicine own the media and Reuters.

High dose vitamin c intravenous (IVC) for acute infection given early enough in the ER (US) or A and E (UK) prevents the need for intensive care. IVC has been proven to clear the lungs and bring back from the dead a man whose life support was about to be switched off. How can there not be a conspiracy when ICU physicians in the UK National Health Service are refusing to use this and making smartarse remarks about it? (See my bitchute video)

The pandemic was quickly over in China. By March things were back to normal. What are the Chinese doing that’s not being reported?

This is how I see it.  A working hypothesis:

1.  “Medicine” is corrupt.  It’s owned by the Rockefelllers.  When US Federal income tax was introduced in 1914 Daddy Oilbucks moved most of his fortune into tax free philanthropy.  He swapped ownership for control.  You only need so many billions to live but you cam still maintain control of your money which gives you so much power. With your own personal investment bank to partner with your own investments you can afford downside risks when there are huge potential upsides. You can use your philanthropies to promote your business interests. See 2. (Gates has turned this into a fine art)

2.  The Rockefellers re-organized medicine from the ground up from 1914 onwards. All the medical schools were based on the Johns Hopkins model which in turn was inspired by Heidelberg University.  The Rockefellers took controlling shares in all the drug companies through their foundations, their banks, their financial institutions, their medical school endowments and other university endowments etc. etc and even their own personal shares.  Let’s not kid ourselves.  The Rockefellers own medicine together with their cronies,  Goldman Sachs etc.  Other big fortunes like the Duponts are in alliance with the Rockefellers.  They don’t get in each other’s way.  They intermarry.

3. Big tech belongs to the Rockefellers and cronies.  They are astute enough to know that youtube, facebook, twitter etc. etc. were fantastic opportunities to extend their influence and control the narrative.  So at the IPO’s they poured money into them.  Youtube and google recruited the best and brightest coders and set them to work.  They just made sure that they had pliable sociopaths in charge in these tech companies.  So when they launched the covid scam they could make sure that any mention of how vitamin d and vitam c would kill the virus was suppressed.  That’s why my video on “the 2 natural “vaccines” was removed from youtube.

4.  The Rockefellers do not want strong national governments which might interfere  with their plans for a “global government”.  Controlled by themselves of course.  The UN and its subsidiary the WHO are instruments of corruption.  They have managed to corrupt all governments at the national level as well.  Our “leaders” are their place men.

5.  Now,  several generations on from Daddy Oilbucks there does not seem to be a strong Rockefelller figurehead like Nelson or David Rockefeller.  Is the new generation up to the job?  The great imitator and opportunist Gates has stolen their copybook and is in alliance with them. So Gates now seems to be their leader.

6.  Was the covid-19 virus deliberately manufactured and released by them? I have not had time to research in detail.  (Patreon has de-platformed me so I’m building an alternative. This written on 16.2.21. The “support” button at the bottom of the page should work soon.  Help fund me so that I can do the research necessary.)

a) The Rockefeller place man Fauci financed “gain of function” experiments at the Wuhan virology lab.  (By the way,  in an honest world we really don’t need this Frankenstein medicine – adequate vitamin d and c kill pathogens).  Fauci was probably abetted by another Rockefeller place man who with Gates and Fauci is on the board of all the Global Public Health fronts.   (See Amazing Polly’s video on Bitchute).  Namely the Chinese American Victor Dzau,  president of the Rockefeller funded NGO the National Academy of Medicine, previously a federal institution, the Institute of Medicine.  Victor Dzau, as a native Chinese speaker  would be able to handle the fine negotiations in China.

b) The gain of function experiments would have been carried out on animals.  Probably ferrets as apparently these make good subjects.  So the covid virus  infects some animals as well as humans.  (Thousands of minks in mink farms are having to be slaughtered because of this).

c) Once they had a  virus which infected animals as well as humans,   it would have been a simple step to place an infected animal in the wet market.

6.  Once the virus was released they hyped it to the maximum.  There was a risk that dissident doctors might come out and say that adequate vitamin d kills any virus and high dose vitamin c intravenous for acute infection prevents the need for intensive care.  (The Chinese know this and were using IVC in December 2019 already.  see my bitchute video).  But the Rockefeller, Gates, Goldman Sachs, Rothschild etc globalists have such a tight control on their franchisees the medical profession and the tame media that they have been able to suppress this knowledge.   Dissident opinions on alt.tech are a threat.  So they simply menaced the alt.tech “free speech” companies with withdrawal of hosting. Pace: the Amazon/parler debacle.  Easy to do as our masters have controlling stakes in everything.

What are their aims?:

A. Crash the world’s economy so that they can buy up all the assets in a fire sale.

B. Eliminate the middle class and especially small business owners who might be  challenge to their hegemony and make us all totally dependent on them.

D. Weaken the health of the population still further with the vaccines so that we are even more dependent on their drugs and vaccines and doctors.  Are they planning a cull?  Will the next pandemic scam be it?  Maybe the present vaccines will be the cull.

E. This last one I’m a bit hazy on because I don’t know much about finance (can someone help me out here) but somehow they are going to finance the trillions and trillions of deficits caused by the economic collapse caused.  This will be money created out of thin air with a keyboard stroke.  There is no risk of default because the creditors are us suckers the tax payers.   So this is a massive transfer of wealth from us to them.  (They used to do this by financing the debt needed for countries to go to war but with nuclear proliferation this could now backfire on them)

The precursors for the covid scam were:

*The 1918 “Spanish Flu” where 50 to 120 million people (according to who you believe) were killed by a Rockefeller vaccine made in horses.  Probably a species jump.  It was a bacterial disease, not a viral pandemic as they want us to believe.  Probably the horse disease: “Strangles.”  The Rockefellers have always been Eugenicists.  Was it deliberate?  I don’t think so but they would have learned that a) they could get away with causing such a holocaust and b) The outcome probably suited them fine.

*The 1976 Swine Flu Hoax with Nelson Rockefeller as VP.

I think this was a dry run for the:

:  An alien reports back to the mothership

The medical profession is lying to us:

The medical profession is lying to us

(The WHO and NHS, like everything else are corrupt)

The 2 natural vaccines which kill covid-19 and which are being suppressed:

It’s long.  I made to give all the information needed for a lawyer to sue for breach of the Hippocratic oath. Watch in 2 or more sessions.  If you find my delivery slow watch in x1.5 speed.  Here is the running order:

25:22 to 1:24.00. High dose vitamin c intravenous (IVC) prevents the need for intensive care in acute infection. I show you the studies and how the medical mafia is trying to suppress this protocol with phoney studies. I show you why they are phoney.

1:24.00 to end. Vitamin D. The studies which prove it works to kill viruses. What dose to take? The vitamin d “hammer”. Protocol given to avoid infection. DIY protocol in case of acute infection. Right at the end I run a 2 minute clip with excerpts from studies of 80 different chronic diseases showing that vitamin d deficiency is implicated in all of them. Hit pause to read the disease which interests you.

A Bioweapon or a Hoax? The Link Between Distinct Conspiracy Beliefs About the Coronavirus Disease (COVID-19) Outbreak and Pandemic Behavior
Imhoff and Lamberty July 2020