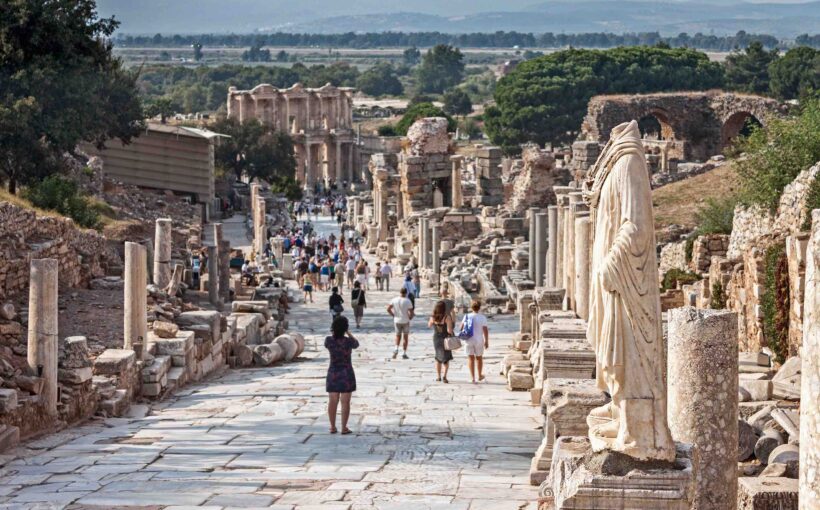 the standard work on obstectrics for many hundreds of years.

“Gynecology” is the most important work on midwifery, gynaecology and pediatrics written in classical times. Written in Greek, it was translated into Latin, Arabic, German, French and English.

It provided much of the material for Rösslin’s book “Der Rosengarten”, 1500 year later through later Latin translations/plagiarisations.

“Could have been written today”

According to Peter. M. Dunn of the Department of Perinatal Medicine and Child Health, University of Bristol, Southmead Hospital: “Gynaecology contains many remarkable contributions that might have been written today” and “His account of internal version in the management of malpresentation or multiple pregnancy is likewise a classic, as is his description of puerperal sepsis”.

Born in Greek colony, trained in Alexandria, practised in Rome

Soranus was born at the end of the 1st century AD in Ephesus, founded as a Greek colony, (on the coast of modern day Turkey). He trained at the famous medical school in Alexandria and practised in Rome. Soranus was Greek, as were traditionally, the most eminent physicians in Rome. He followed the Methodist school of Asclepiades. Soranus wrote over 20 works, including a “Life of Hippocrates”.

French historian of pharmacy, Jean Flahaut has traced the earliest mention of it back to the second century in Alexandria, shortly after the birth of the theriac of Andromachus. but it may go back further. A much simpler ” antidote to all poisons ” tonic and cure-all than the much more complex Theriac of Andromachus or Mithdridatium. It has only four ingredients and the formulation remained constant throughout the centuries (Flahaut) The ingredients were: roots of aristochia (birthwort) , gentian roots, myrrh and laurel berries with honey as the excipient and preservative.

According to Flahaut, the two types of theriac typify the argument between proponents of what he calls “oligopharmacy” and “polypharmacy” from the time of the ancients down to the 19th century. Pliny the elder said about theriac: ” This name is given to a preparation devised with luxury in mind….. when in fact nature supplies plenty of remedies, and each one, used on its own, is all that is needed for healing.”

Did it work? My analysis of the ingredients

There are over 500 different species of aristolochia. It contains a potentially lethal toxin: aristolochic acid. Dioschorides says it can be given to mothers who have just given birth in order to help expel the placenta. Aristolochia bracteolata is supposed to be anthihelminthic (kills intestinal worms). A decoction is supposed to stimulate production and activity of white blood cells. Several species are used in folk medicine as an antidote to snakebites.

According to Segen’s Medical Dictionary

Herbal medicine
Gentian is used in Western herbal medicine as a digestive tonic to increase the appetite, peristalsis and flow of bile.

From a monograph on Myrrh by Rebecca Joy Knottnerus

“…….Research shows that a group of compounds known as sesquiterpene lactones, show strong antibacterial and antifungal activity against Staphylococcus (involved with myriad infections, internal and external), Candida albicans (commonly responsible for yeast infections), and pathogenic strains of E. coli (often involved with food poisoning and diarrhea) (Upton). In an issue of Planta Medica, myrrh was studied for its anaesthetic, antibacterial and antifungal properties. The researchers reported that after extracting and purifying eight sesquiterpenes from Commiphora molmol, they found that a “mixture of furanodiene-6-one and methoxyfuranoguaia-9ene-8-one showed antibacterial and antifungal activity against standard pathogenic strains of Escherichia coli, Staphylococcus aureus, Pseudomonas aeruginosa and Candida  albicans…” “These compounds also had local anaesthetic activity, blocking the inward sodium current of excitable mammalian membranes”(Dolara et al. 356-358)……….”

In a study done by Awad and Fumaa into plants used by Kuwaiti diabetics, myrrh was shown to increase glucose tolerance.

In an Egyptian study, Myrrh was found to be as effective in killing blood and liver flukes as the standard medical drug Praziquantel.

In a recent study (Al-Harbi et al) myrrh was found to be a potent anti-carcinogen. Unlike standard chemo drugs however, it does not harm healthy cells.

From widipedia: “The chemical compound lauroside B isolated from Laurus nobilis is an inhibitor of human melanoma (skin cancer) cell proliferation at high concentrations.”

“Except as a stimulant in veterinary practice the leaves and fruit are very rarely used internally. They were formerly employed in hysteria, amenorrhoea, flatulent colic etc. The berries have been used to promote abortion.

The essential oil can be added to massage oils for arthritis and muscle aches and pains. It can also be added to salves for bruises, itching and other mild skin irritations.

A poultice of the leaves and berries, simmered till soft, can be placed on the chest to relieve head and chest colds.

A tea made of the leaves and/or berries aids in digestion, helps to rid the body of impurities and makes a good general health tonic. It is particularly helpful to women who are having trouble urinating after childbirth. Pregnant women, however, should not use bay laurel beyond the little bit we might use in cooking.

Tea can also be used to calm nerves.

Note: Aristolochic acid found in aristolochia may be a carcinogenic kidney toxin. Its mutagenic properties were discovered around 1983. It is banned in Germany and by the FDA in the US. I have looked at the evidence in medical journals and the evidence seems fairly flimsy, mainly based on studies of rodents using the isolated aristolcochic acid on its own. Most researchers work either directly or indirectly for the drug industry so it is not uncommon for a load of hysteria to be whipped up about “natural” or herbal products. I somehow can’t imagine that large sectors of the population took poor man’s theriac, containing it, on a regular basis for nearly two thousand years without anyone realising that it had the side effect of giving you kidney cancer. I am guessing that the potent anti-cancer compounds in myrrh and laurel berries cancelled out any harmful effects (if there are indeed harmful effects). Perhaps the ancient Alexandrian pharmacists knew all this and made a balanced and safe formula in the first place. In any case, I am not advocating whipping up a bit of theriac diatessoron in your garage.

Terribly unsanitary conditions and poor hygiene throughout history but particularly in the middle ages produced diaorrhea and dysentery on an epidemic scale. They were called “the flux” and “the bloody flux” respectively. Poor man’s theriac would cure most of the causes. It would kill intestinal worms ,bacteria and fungal infections, the cause of most diarrhoea. It does seem to be a genuine cure-all and tonic. Myrrh is the only ingredient which would have to be imported, thus making it expensive and I am guessing that some apothecaries would have been tempted to adulterate the mixture. Apothecaries throughout Europe were fairly well regulated, usually by a doctor employed by the municipality, and just from this one example, you can see why. In an adulterated batch, with something else substituted for the myrrh, the (alleged) carcinogenic properties of the aristolochia might not be cancelled out, leading to damage to the kidneys. Perhaps adulteration accounts for why it eventually fell out of favour.

Alexandria in Egypt 391AD The final surviving part of the great library of Alexandria, founded in the 3rd century BC by Ptolemi 1, Alexander the Great’s successor, after two previous fires, is finally destroyed by the Coptic Pope Theophilus in 391 AD.