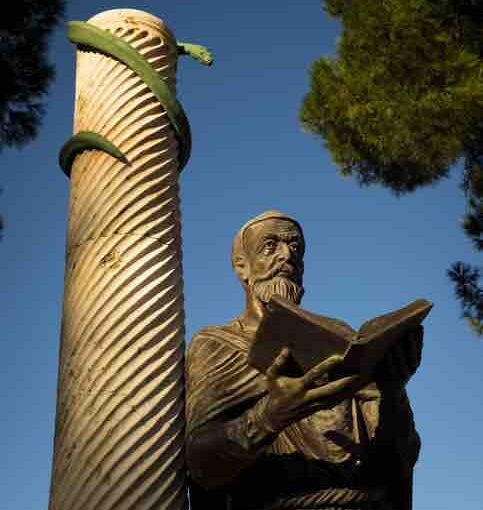 Statue of Galen in Pergamon Turkey

This is a free access chapter from my book “The unofficial history of medicine” For full acccess to all chapters click on the “Support Chris” button at the bottom and subscribe.

Galen – The authority in medicine for 19 hundred years!

Galen is an important figure because of his enormous influence throughout the history of medicine. He is quoted as the authority right up to the later part of the 19th century. Galen was born in the then Greek city of Pergamum (now Bergama), just inland on the coast of what is now Turkey, on the opposite coast of the Aegean sea to Greece. Pergamum was one of the finest cities in the eastern Mediterranean with a library second only to Alexandria and a shrine to Asclepius (the Greek god of medicine). The Greek world had been part of the Roman empire for nearly three centuries by then.

Galen’s father was a rich architect and builder, a highly educated man with many intellectual interests. Galen was educated in Stoic, Platonic, Aristotelian and Epicurean philosophies. At 16 he began studying at the local asclepion (healing shrine dedicated to Asclepius, mythical physician and Greek god of medicine). The asclepion at Pergamum was popular with rich and famous Romans seeking a cure.

At 19 starts to travel  widely to study medicine

At 19 his father died, leaving him independently wealthy. He then travelled and studied widely in various places around the Aegean sea before winding up at the famous medical school of Alexandria.

At 27 becomes physician to the gladiators in Pergamum.

At the age of 27 he returned to Pergamum where he became physician to the gladiators of the High Priest at the asclepion. In the four years in this position, Galen gained experience in dietetics, fitness, hygiene and preventative medicine as well as the treatment of severe trauma. The gladiators often had severe wounds which gave him anatomical insights. (Human dissection was not allowed at that time). A this time Galen started writing medical and philosphical treatises. During Galen’s tenure with the gladiators, only five deaths occurred compared to the sixty of his predecessor.

Galen went to Rome in 162. He started by carrying out spectacular public dissections and vivisections of animals. This made a big impression and after successfully treating the illness of the fashionable Aristotelian philosopher Eudemus he was soon physician to the emperor’s court. Galen’s Theriac contained sixty-four substances. Marcus Aurelius took some every day.

Galen’s test of a good Theriac

Give some of the Theriac to a cock.  If it’s good Theriac and the cock is bitten by a viper it will survive.

According to Galen garlic was the Theriac of “rustics”.

Return to Pergamum in 166

Galen left Rome in 166 to return to Pergamum, probably to escape an outbreak of plague or possibly to avoid being poisoned by jealous, less able physicians.

Physician to Commodus the Emperor’s son

Two years later Galen was summoned to Rome by the emperor, Marcus Aurelius, to act as physician for Commodus, his son and heir, while Marcus Aurelius was away fighting Germanic tribes. In 180 AD, Marcus Aurelius fell ill and died while being treated for the illness in what is now Vienna. Commodus , who had been looked after by Galen since childhood was a very fine physical specimen and liked nothing more than to take part himself in gladiatorial combats. He saw himself as the reincarnation of Hercules and had statutes made of himself as such. It seems likely that his muscularity and physical prowess had everything to do with the knowledge Galen developed while looking after his gladiators in Pergamum.

Commodus was a poor administrator and became increasingly narcissistic and megalomaniac. He survived several conspiracies and attempts on his life until he was eventually strangled in his bath by his wrestling partner. Galen was physician to four more emperors (Strathern). This was a time of great upheaval and political instability in the Roman Empire with increasing incursions by barbarian armies. Some historians see Commodus’ reign as the start of the decline of the Empire.

Galen carried out many dissections and vivisections on a variety of animals, mainly pigs and primates. Human dissection was forbidden.

He was very skilled as a surgeon and carried out some complex procedures. Some of these, such as his procedure to correct cataracts were not performed again until modern times.

Galen considerably added to Hippocrates’ humours theory by melding it with Aristotle’s theory that the earth is composed of four elements, air, fire, earth and water. Galen’s theory has corresponding humours, organs and dual elements. So, according to Galen we have:

People with sanguine temperaments are extroverted and social. Cholerics are energetic and passionate. Melancholics are creative and kind. Phlegmatics are dependable, kind and affectionate.

Galen’s system of calibration for drugs

The 4 basic qualities were Hot versus Cold and Wet versus Dry with Hot versus Dry the most important.  There are 4 degrees on the Hot/Cold scale and 4 degrees on the Wet/Dry scale.  So in addition to its intrinsic pharmaceutical qualities the drug would be matched to the patients temperament.  This nonsense is still influencing herbalists and even today you can find some  talking of a herb’s “cooling properties” for example.

• There are distinct differences between venous (dark) and arterial (bright) blood. Explained the difference between motor and sensory nerves, explored the idea of muscle tone and explained the difference between agonists and antagonists
• Veins and arteries are structurally different
• Each part of the body has its own particular purpose
• Urine produced by the kidneys, not the bladder as previously thought
• Distinguished seven varieties of cranial nerve
• Developed an early form of psychotherapy: “talk therapy”
• Believed there was a physiological basis for mental illness
• Believed that the mind’s functions (“rational soul”) are centred in the brain (previously thought to be in the heart)
• Used over 150 single and compound drugs of animal and vegetable origin
• Greatly improved knowledge of bone structure and musculature

• Circulatory system consists of two separate, one way means of distribution
• Venous blood generated in the liver and distributed to all organs
• Arterial blood originates in the heart and distributed to all organs
• Blood is regenerated in either the heart or the liver
• Wrongly thought that the “rete mirabile”, (wonderful net) of blood vessels in the carotid sinus in hooved animals exists also in humans.
• Was a great believer in venesection (blood-letting)
• Pathology based on his “improved” version of Hippocrates’ four humors
• The spiritual soul is in the heart, and the “appetitive” soul is in the liver
• Vital “pneuma” (spiritual essence) in the heart and psychic pneuma in the brain
• Revised and corrected Dioscorides’ materia medica so that the drugs now became tools to rebalance the humors instead of for their specific actions (“specifici”). This error was further perpetuated by the Arabs and Avicenna (see entry, 10th century).

Wrote treatises on medicine, anatomy and physiology and also logic and philosopy. Galen sought to combine philosophy with medicine and wrote a treatise called “That the Best Physician is also a Philosopher”. He believed that theory, observation and experimentation should be used together.

Galen was hugely prolific. Over 350 treatises survive. It is thought that he wrote over 500. Galen wrote in Greek not Latin. After the collapse of the Western Roman Empire, scholars read mainly Latin and because of this, Galen was studied very little in Western Europe in the dark ages and early middle ages. He continued to be read and studied in the (Greek-speaking) Byzantine empire however and all the works which exist today were copied by Byzantine scholars. Many of his works were translated into Arabic during the so called Islamic Golden Age and some of his works have come down to us through the Arabic version, the original version having been lost. Some versions only exist in medieval Latin translations from Arabic.