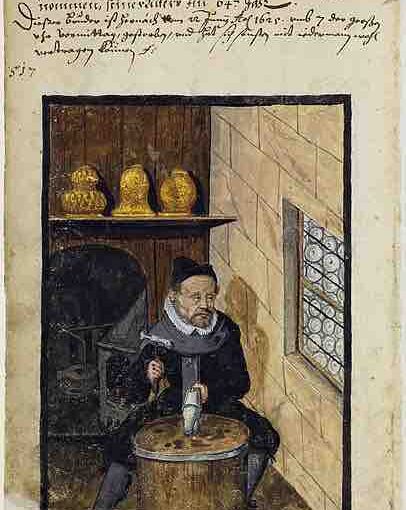 From his autobiography. Cellini (1500 – 1571). I have given the date of 1530 for the cure because a few pages previously, in another context, Cellini mentions that he was thirty years old:

The “guaiac cure” for syphilis was imported from the West Indies where syphilis was endemic and where the natives used this cure for it.   See previous chapter on Colombus’s sailors bringing it to Europe.  Guiac is a wood.  A decoction was made from it to raise the temperature and the cure consisted of 2 sessions of hyperthermia per day for around 40 days.  The hyperthermia was generated by drinking the guiac decoction, wrapping up in thick clothes and staying in bed for 2 hours in a hot room.  The aim was to sweat as much as possible.  In addition to this a near fast was observed. In the 20th century both syphilis and gonorhea have been cured with therapeutic hyperthermia.  See my article on Monardes where I go into more detail.

From Benvenuto Celini's autobiography
“..It was true indeed that I had got the sickness ; but I believe I caught it from that fine young servant-girl whom I was keeping when my house was robbed. The French disease, for it was that, remained in me more than four months dormant before it showed itself, and then it broke out over my whole body at one instant. It was not like what one commonly observes, but covered my flesh with certain blisters, of the size of six-pences, and rose-coloured. The doctors would not call it the French disease, albeit I told them why I thought it was that. I went on treating myself according to their methods, but derived no benefit. At last, then, I resolved on taking the wood (guaiac), against the advice of the first physicians in Rome ; and I took it with the most scrupulous discipline and rules of abstinence that could be thought of : and after a few days, I perceived in me a great amendment. The result was that at the end of fifty days I was cured and as sound as a fish in the water.

Some time afterwards I sought to mend my shattered health, and with this view I betook myself to shooting when the winter came in. That amusement, however, led me to expose myself to wind and water, and to staying out in marsh-lands ; so that, after a few days, I fell a hundred times more ill than I had been before. I put myself once more under doctors’ orders, and attended to their directions, but grew always worse. When the fever fell upon me, I resolved on having recourse again to the wood ; but the doctors forbade it, saying that if I took it with the fever on me, I should not have a week to live. However, I made up my mind to disobey their orders, observed the same diet as I had formerly adopted, and after drinking the decoction four days, was wholly rid of fever. My health improved enormously ; and while I was following this cure, I went on always working at the models of the chalice. I may add that, during the time of that strict abstinence, I produced finer things and of more exquisite invention than at any other period of my life. After fifty days my health was re-established, and I continued with the utmost care to keep it and confirm it. When at last I ventured to relax my rigid diet, I found myself as wholly free from those infirmities as though I had been born again. Although I took pleasure in fortifying the health I so much longed for, yet I never left off working ; both the chalice and the Mint (Cellini was working for the pope) had certainly as much of my attention as was due to them and to myself”.

Several things are of interest here:

Did Celini cure Lyme disease with the second Guiac cure?
What caused the second bout of illness with Celini using the Guiac cure successfully according to him?   He tells us that he was out hunting in marshes. Was this the syphilis returning? Or possibly gonorhea? Was he bitten by a tick and contract Lyme disease? All those 3 conditions have been cured in the 20th century using therapeutic hyperthermia so I think the guiac cure would have worked for whichever of those Celini had contracted. Lyme disease causes all kinds of symptoms. How do you know if it’s Lyme disease? Acccording to Firedrich Douwes M.D if you had the “bull’s eye rash” it is 100% certain that you have Lyme disease. Anti-biotics are hit and miss Don’t waste any time. Take yourself off to the Klinik St. George in Germany in Bad Aibling near Munich where Herr Doktor Douwes will cure your Lyme disease with 2 sessions on Hyperthermia, taking your temperature up to 41.6 degrees C.. Klinik St George.

4. Cellini tells us how healthy he feels after the “cures” and how he was able to do some of his best work. This kind of testimony is common to those who have carried out extended fasts.