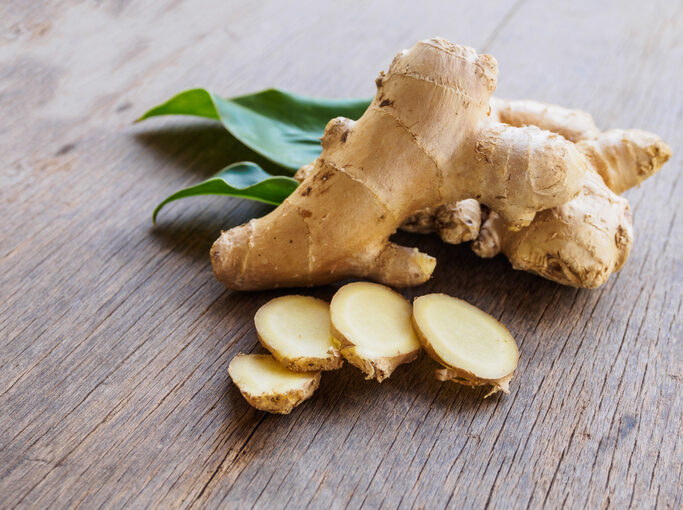 Chemical analysis of ginger shows that it contains over 400 different compounds.

The U.S. Food and Drug Administration classifies ginger as “Generally Recognised as Safe” and the German Commission Monographs reported that ginger has no known side effects and no known drug/herb interactions. In fact ginger is a tonic that you can take every day to protect and improve your health. It has anti-ulcer and anti-tumour effects and it’s a proven cancer preventative.

“….Evidences from in vitro, animal, and epidemiological studies suggest that ginger and its active constituents suppress the growth and induce apoptosis of variety of cancer types including skin, ovarian, colon, breast, cervical, oral, renal, prostate, gastric, pancreatic, liver, and brain cancer. These properties of ginger and its constituents could be associated with antioxidant, anti-inflammatory, and antimutagenic properties as well as other biological activities…” Ginger and Its Constituents: Role in Prevention and Treatment of Gastrointestinal Cancer. Prasad & Tyagi 2015

In the studies that I’m going to quote from ginger was usually taken in powder form in capsules. Fresh ginger juice is more potent and has a broader spectrum of active ingredients. I recommend taking 15 to 20 grams of raw ginger as juice in my Healthiest Breakfast Ever mark I  if you are not using sun or tanning bed exposure for vitamin d or in my Healthiest Breakfast Ever mark ii if you are.

First of all let’s look at ginger’s drug competitors, aspirin and all the other me-too Non Steroidal Anti Inflammatories (NSAID’s). Then with the aid of excerpts from studies in medical journals I will prove to you that ginger does everything NSAID’s are supposed to do and much more, but without the dangerous side effects which prolong and worsen your condition. What’s more – ginger will reverse the damage the NSAID’s have caused to your digestive tract in the first place.

In 400 BC Hippocrates prescribed willow bark (to be chewed) as an analgesic and gave willow leaf tea to ease the pain of childbirth. The active ingredient is salicin. In 1897 a Bayer chemist added an acetyl group to salicylic acid to reduce its irritant properties and Bayer patented the process. In 1899 Bayer named Acetylsalicyclic acid aspirin.

Aspirin is by far the most frequently sold pain killer. 40,000 tons are consumed globally each year (wikipedia).

Let’s look at what the “bible of orthodox medicine” the Merck Manual (nineteenth edition) says about Aspirin and NSAID’S for the treatment of Rheumatoid arthritis (RA). “…Aspirin is no longer used for RA as effective doses are often toxic. Only one NSAID should be given at a time..” “…Other possible adverse effects of all NSAID’s include headache, confusion and other CNS symptoms, increased blood pressure, worsening of hypertension, edema, and decreased platelet function. …interstitial nephritis can occur..” “…Patients with urticaria, rhinitis, or asthma from aspirin can have the same problems with these other NSAID’s..”

Low dose aspirin is often given as a prophylactic to prevent heart attacks but the adverse effect is gastrointestinal bleeding.

NSAID’s cause ulcers in the stomach, the intestine and the colon.

Stomach “..it is estimated that 1%–2% of continuous NSAID users experience a clinically significant (note: in plain English that means life threatening) upper GI event per year. These findings represent a significant clinical concern, as patients taking NSAIDs experience a relative risk of upper GI bleeding and perforations of up to 4.7 compared with nonusers….” Gastrointestinal injury associated with NSAID use: a case study and review of risk factors and preventative strategies Goldstein & Cryer 2015

This website is mainly about the Seignalet diet. Dr. Seignalet proved that around 100 chronic diseases are caused by damage to the cells of the intestinal wall from eating the wrong foods. Eat the right foods and the gut wall heals and the disease goes into remission. (Please read the rest of this website).

The downwards vicious spiral (it can be avoided)

“….Nearly 50% of older adults take one or more medications that are not medically necessary…” Clinical Consequences of Polypharmacy in Elderly Maher et al 2014

How many therapeutic actions does ginger have? How long have you got? For instance when combined with gelam honey it kills MRSA in vitro. But we will look at just 5 effects here:

In other words ginger suppresses the mechanism of damage of RA

2. Ginger as an anti inflammatory

“..Ginger is described in Ayurvedic and Tibb systems of medicine to be useful in inflammation and rheumatism. In all 56 patients (28 with rheumatoid arthritis, 18 with osteoarthritis and 10 with muscular discomfort) used powdered ginger against their afflictions. Amongst the arthritis patients more than three-quarters experienced, to varying degrees, relief in pain and swelling. All the patients with muscular discomfort experienced relief in pain. None of the patients reported adverse effects during the period of ginger consumption which ranged from 3 months to 2.5 years…” Ginger (Zingiber officinale) in rheumatism and musculoskeletal disorders Srivastava & Mustafa 1992

Prostaglandins are short lived hormones made in all cells. They are produced at sites of tissue damage or infection where they cause pain, fever and inflammation as part of the healing process. Prostaglandins are catalysed by 2 enzymes. Cyclooxygenase 1 (usually referred to as “COX 1” in medical literature) produces normal baseline levels. When the body is injured (or inflammation occurs) Cyclooxygenase 2 (COX 2) is activated to produce extra prostaglandins to help deal with the injury. This is a normal part of the body’s healing process. In disease, chronically high levels of prostaglandins are produced, leading to chronic inflammation. (Information gleaned from the Society for Endocrinology’s website.)

How NSAID’s work and how ginger works better!

NSAID’s work by inhibiting COX 1 and/or COX 2. thereby reducing the inflammatory prostaglandins. Some NSAIDS work selectively by inhibiting only one kind of COX while others inhibit both kinds. It’s often not clear what the precise action of a given NSAID actually is. Ginger is both a COX 1 and a COX 2 inhibitor but it has an extra action that NSAID’s don’t have. It also inhibits the enzyme Arachidonate 5-lipoxygenase which catalyzes a family of inflammation mediators found in white blood cells. A patented extract made from 2 species of ginger inhibits genes encoding cytokines and chemokines which are involved in inflammation, as well as COX 2. Ordinary ginger may contain some of the ingredient. Information gleaned from Ginger–an herbal medicinal product with broad anti-inflammatory actions Grzanna et al 2005

3. Ginger as an analgesic (pain killer)

“…..Within the limitations of this study, it can ban be concluded that ginger powder is as effective as ibuprofen in the management of postsurgical sequelae. Comparison of anti-inflammatory and analgesic effects of Ginger powder and Ibuprofen in postsurgical pain model: A randomized, double-blind, case–control clinical trial Rayati et al 2017…”

“…Ginger was modestly efficacious and reasonably safe for treatment of Osteo Arthritis….” Efficacy and safety of ginger in osteoarthritis patients: a meta-analysis of randomized placebo-controlled trials Bartels et al 2015. (Chris’s note: see my page on cabbage leaf. Cabbage wrap applied to the joint is the most effective for pain relief).

4. Ginger to repair damage to the gastrointestinal tract(stomach/intestine/colon) caused by NSAID’S

“….From these results, ginger powder is suggested to protect the stomach against the ulcer formation induced by aspirin by reducing iNOS activity in the gastric mucosa and inflammatory cytokine (TNF-α and IL-1β) expression. These effects of ginger powder seem to be derived from the actions of gingerol and shogaol, the main ingredients of ginger….” . Protective Effects of Ginger against Aspirin-Induced Gastric Ulcers in Rats Wang et al 2011

Note: These studies show that taking ginger long term for pain relief and to fight inflammation will not damage the stomach, unlike NSAID’s which will! However, the best treatment by far for stomach ulcer is fresh cabbage juice. This will heal the stomach in around 10 days.

“..Conclusion. These results indicate that ginger and 6-shogaol restore the disruption of intestinal integrity and enteric dopaminergic neurons in an MPTP-injected mouse PD model by inhibiting the processes of inflammation and apoptosis, suggesting that they may attenuate the GI dysfunction in Parkinson’s Disease patients…” Ginger and 6-shogaol protect intestinal tight junction and enteric dopaminergic neurons against 1-methyl-4-phenyl 1,2,3,6-tetrahydropyridine in mice. Huh et al 2018

“…Ginger and its polyphenols have been shown to target multiple signalling molecules that provide a basis for its use against multifactorial human diseases. Moreover, most of the known activities of ginger components are based only on in vitro and in vivo studies, except for a few clinical studies in human subjects…” Ginger and Its Constituents: Role in Prevention and Treatment of Gastrointestinal Cancer Prasad & Tyagi 2015

5. Ginger as a prophylactic (preventative) against Cardiovascular Disease

“…The above findings show that gingerol compounds and their derivatives are more potent anti-platelet agents than aspirin under the conditions described in this study. [8]-Paradol, a natural constituent of ginger, was found to be the most potent COX-1 inhibitor and anti platelet aggregation agent….” Effective anti-platelet and COX-1 enzyme inhibitors from pungent constituents of ginger. Nurtjahja-Tjendraputra et al 2003