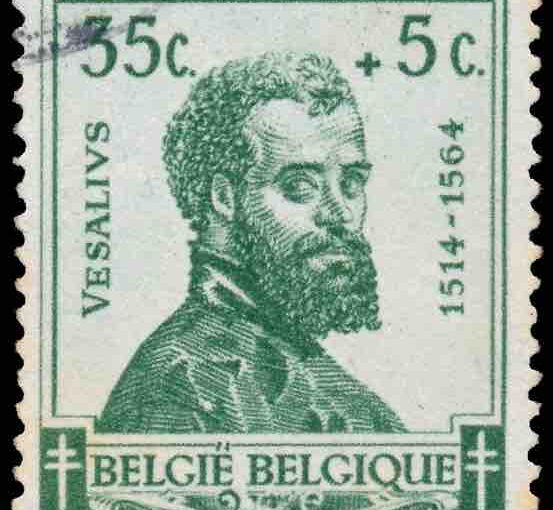 “The golden age of anatomy”

Gabrielle Fallopio (1523 – 1562) was an important figure in the history of anatomy, ending his career in the leading centre of anatomy, Padua. He lived in the so called “golden age” of anatomy with many illustrious contemporaries. Fallopio was interested in all kinds of therapies.

Clinical trial of the first condom

Fallopio was the first to describe a condom in 1564 in a publication which appeared two years after his death. The condom consisted of a linen sheath, shaped to go over the tip of  and under the foreskin and held on with a pink ribbon, designed to protect against syphilis infection. In one of the first clinical trials he tried it on 1,100 men, and claimed that none of them contracted the disease.

Fallopio was born in Padua to a noble but poor family. He received an education in the classics and served as a canon in the cathedral of Modena. Following the death of his father and ensuing financial difficulties, he sought a career in the clergy and became a priest in 1542. With an upturn in the family fortunes he was able to study medicine.

As a poor medical student worked as a surgeon

As Fallopio was very poor, he tried to earn some money as a surgeon but was not very successful and several of his patients died.

Studies medicine at Ferrara then teaches anatomy at Pisa

Falsely accused of carrying out vivisection!

being invited to take up the prestigious post of professor of anatomy and surgery at the Padua in 1551 then the leading centre of anatomy. He had great success in this post and attracted many students who would go on to become renowned. He was also professor of botany and had charge of the botanical gardens.

Fallopio developed pulmonary tuberculosis and died of pleurisy at the age of 40.

Most of his books were published posthumously

The only book Fallopio published in his lifetime was Observationes anatomicae in 1561. Many of Fallopio’s writings were published posthumously and edited from his lecture notes. Four books deal with anatomy and further books deal with syphilis, surgery, pharmacy and balneology.

*Dissected foetuses, newborn infants and children
*Showed that teeth and bones are not from the same tissues as was previously believed
*First clear description of primary dentition
*Did much work on bone structures
*Described the kidneys in great detail
*Improved on Vesalius’ account of the structure of the inner ear
*Studied reproductive organs in both sexes and coined the word vagina for the neck of the uterus
*Described the Fallopian tube (named after him) leading from the ovary to the uterus
*He was the first to describe many part of the body with some named after him, such as Fallopian hiatus,Fallopian valve,Fallopian muscle and Fallopian tube (Mortazavi et al)

Canada 1535 Jacques Cartier, first European to explore and map Canada Saved from scurvy by a concoction made from the bark of the annedda tree

During his second trip to explore Canada, seeking the fabled “North West Passage”, Cartier and his men became ice-bound for five months in the winter of 1535/1536 at the mouth of the St. Charles River and they were struck with scurvy. In his journal, Cartier wrote that by mid February, out of 110 men, only 10 were well enough to help the others. On a visit by the local Iroquoi chief to the French fort, the chief told Cartier that a concoction from a tree known as anneda (thought to be Thuja occidentalis – white cedar) would cure scurvy. 85 Frenchmen were able to survive the winter. See entry for Bordeaux France 1966 where Professor Jacques Masquelier isolates pycnogenol: vitamin c potentiator. (Chris’s note:  pycnogenol is also found in grapeseed. and it re-cirulates vitamin c.  I take grapeseed extract first thing in the morning and last thing at night.)

Born Andries Van Wesel (Vesalius is a latinization of his surname) Famous for his book “ De humani corporis fabrica libri septem” (The Seven Books on the Structure of the Human Body) aka “The Fabrica” which revolutionized medicine by clearly showing for the first time the structure of the human body.

First physician to carry out dissection himself

In order to study for his doctorate Vesalius then moved to Padua , at that time becoming the foremost medical school and where dissections were regularly carried out. On receiving his doctorate Vesalius was appointed lecturer in surgery at the age of 23. Vesalius carried out anatomical demonstrations by dissecting the bodies of executed criminals. The actual physical dissection was, previous to Vesalius, carried out by lowly barber surgeons with a commentary from the physician/lecturer. Vesalius considered that it was important for the anatomist to carry out the dissection himself.

In 1538 he published “Tabulae Anatoicae Sex” (Six Anatomical Drawings). This is notable for several things: 1) Its great quality as compared to previous such publications. This was no doubt due to Vesalius’s skill but also to the fact that he employed a gifted professional artist to produce the drawing (probably in the studio of Titian in Venice) as well as the best wood block printer of the time. (Oporinus – the ex amanuensis of Paracelsus) 2) Its corrections of some of Galen’s errors (Galen had not had access to human cadavers and had based his anatomical descriptions on dissections of animals) 3) Its perpetuation of some of Galen’s errors such as showing the “rete mirabile” beneath the human brain when this exists only in hooved animals. The illustrations were printed using wood blocks in Basel in Switzerland.

Realises that Galen was not infallible

After realising that Galen was not infallible as he had previously thought, Vesalius produced the famous “Fabrica”, published in 1543. The work took 5 years to produce and consisted of 7 books with a total of 200 illustrations over 700 pages of detailed text.

The study of anatomy was transformed by the 7 volume “Fabrica”

Due to the quality of this work which far surpassed anything that had gone before, the subject of anatomy was transformed. (Leonardo da Vinci’s drawings would only be discovered centuries later.)

Vesalius had the first copy hand painted and bound in purple velvet silk and travelled to Mainz in Germany to present this copy to the Holy Roman Emperor, Charles V, who promptly made him his personal physician. (Vesalius’ life long goal). Vesalius accompanied Charles on all his travels. When Charles abdicated in favour of his son Philip, he made Vesalius a count.

Returning from a pilgrimage to Jerusalem, Vesalius fell ill and was put ashore on the Greek Island of Zakynthos where he died in 1564.