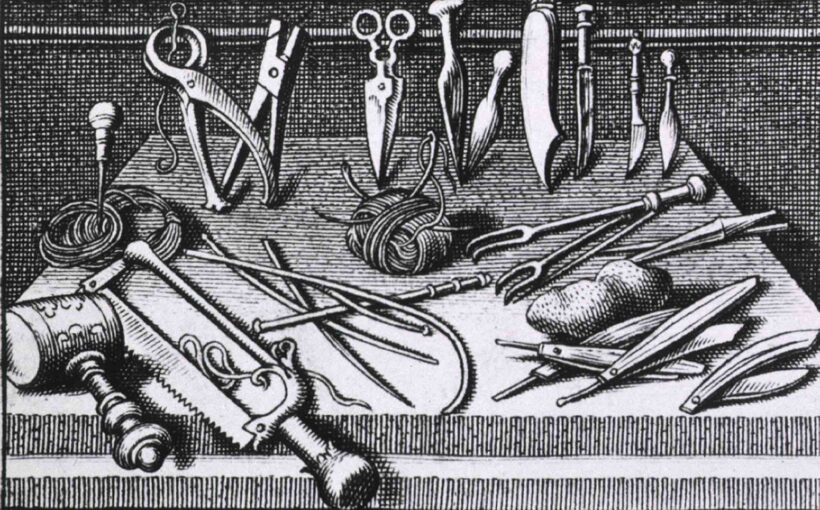 1545 France Ambroise Paré, Surgeon, use of ligature to prevent hemorrhage

1545 France Ambroise Paré , Surgeon, use of ligature to prevent hemorrhage

Paré (c. 1510 – 1590) is regarded as the father of modern surgery and forensic pathology. He developed many novel surgical techniques, notably in the treatment of war wounds and invented several surgical instruments. He was also an anatomist. Paré is also notable for writing and publishing his books on surgery in French rather than the Latin traditionally used in medical books.

Paré trained as a barber-surgeon at the Hotel Dieu, a hospital that was part of the faculty of medicine of the University of Paris. At the time of Paré’s training it had become a renowned centre of learning.

Although barber-surgeons had a lowly status compared to the physicians, their hand’s on experience meant that they were highly skilled in surgical techniques unlike the physicians who directed them.

French medicine of the time was still dominated by Galenic dogma, and traditional theory was considered more important than treatment based on experience and personal observation.

In 1537, Paré was employed as an Army Surgeon at the Siege of Turin. At that time, gunshot wounds were treated with boiling oil. (Agonizing pain was regarded as a normal part of surgery.) During one battle, his supply of oil ran out and in desperation he used an old Roman method and treated the wounds with a mixture of egg yolk, rose oil and turpentine (the turpentine is antiseptic). The next day, those treated with boiling oil were still in agony, “feverish” and suffering “great pain and swelling about the edges of their wounds”. Some had even died in the night, while the men with wounds treated with the ointment were resting comfortably and their wounds were beginning to heal.
During amputations Paré also reintroduced ligature of major arteries as a replacement for the usual practice of searing the wounds with hot irons to prevent haemorrhaging.

The success of his improvised treatments showed him the way forward

Having observed how much better his improvised treatments were than the traditional, standard treatments, Paré decided to use only those procedures which he had personally experienced as useful.

Another break with tradition – published in the vernacular

In 1545, in a break with medical tradition, Paré published his book on the treatment of gunshot wounds in French instead of Latin. This was ridiculed at the time but it established a tradition from that time onwards that books on Surgery would be written in the vernacular.

According to Charles B Drucker of Yale University School of Medicine:
“Paré’s clear writing and use of the vernacular, backed by decades of practical experience, ensured that his texts and techniques would become the foundation of a new surgery.”

Surgeon to the French kings

Paré was surgeon to the French kings to the end of his life at the age of 80. He served Henry II, Francis II, Charles IX and Henry III.
According to Britannica, “Unlike many surgeons of his time, Pare resorted to surgery only when he found it absolutely necessary. He was one of the first surgeons to discard the practice of castrating patients who required surgery for a hernia. He introduced the implantation of teeth, artificial limbs, and artificial eyes made of gold and silver. He invented many scientific instruments, popularized the use of the truss for hernia, and was the first to suggest syphilis as a cause of aneurysm (swelling of blood vessels)”.