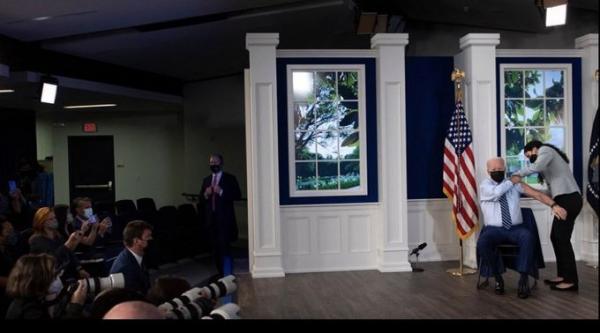 (Stolen from the comments section of the Conservative Woman)

Wikipedia: “…In 1775, Potemkin became the governor-general of Russia’s new southern provinces. An absolute ruler, he worked to colonize the wild steppes, controversially dealing firmly with the Cossacks who lived there. He founded the towns of Kherson, Nikolayev, Sevastopol, and Ekaterinoslav. Ports in the region became bases for his new Black Sea Fleet.

His rule in the south is associated with the “Potemkin village”, a ruse involving the construction of painted façades to mimic real villages, full of happy, well-fed people, for visiting officials to see….”

If only our Potemkin democracies and their Potemkin governments were open to basing policy decisions about public health on sound data and broad, informed debate. Alas, I don’t believe that’s the case.

Just one example springs to mind: so intent is the rapidly dementing Potemkin “President” of the United States on implementing the plans of his sinisterly recondite handlers to vaccinate every breathing human (apart from the vast swathes of ‘cultural enrichers’ being brought in to flip Texas and other states “blue” to ensure a permanent One Party State), that he made a widely-broadcast display of dutifully receiving his booster shot while sitting in the White House. You could actually see the idyllically beautiful grounds outside the windows, too.

Except … the whole thing was fake. It was staged. We now know (not through the “reporting” of the “trusted sources” legacy media but through independent new media) that the windows and the room the dementia patient was sitting in was a film studio set, videoed nowhere near the White House.

Which immediately raises the suspicion, of course, that if that was fake, why not the jab too?

An obnoxiously despotic geriatric getting jabbed in the arm with saline solution isn’t going to convince anyone with a functioning brain that hasn’t been paralysed by the endless fear-pawn and dictatorial decrees of the last 18 months.

But the people behind this stunt don’t appear to care that many of us can see that we’re being subject to a gigantic fraud, a lie.

They appear to believe that, since they control the legacy media (whose purpose is to serve the Deep State-Globalist Regime controlling our Potemkin governments), they can gaslight enough of the people they have psychologically terrorised with plague-pawn and enforced social isolation into believing anything they say.

They seem to be calculating that they have succeeded in inducing Stockholm Syndrome in the populace. They have calculated on producing psychologically brutalised people who now feel that their only option is to appease their captors and do as they’re told in the hope that they might get treated a little more nicely. And that, of course, includes deliberately arousing intense hatred among those afflicted with the Syndrome toward the unjabbed (the Stockholmers, we must remember are no longer capable of independent, critical thought, at least whilst their condition persists).

We could be forgiven for supposing that we are in the midst of an organised, long-planned, global psy-ops aimed at a “Build Back Better” Great New World Mordor Reset using an escaped/deliberately released viral bioweapon as a means to destroy the existing economic and social fabric of all countries integrated into the irretrievably failing global fiat currency banking system.

To “build back better”, of course, you must first arrange to totally destroy our existing ways of life, including the small and medium businesses that formerly comprised the backbone of the “old normal” economy in the West, as well as the modest personal privacy (and property/assets) upon which any possibility of liberty rests.

This may seem like trying to hum a merry tune in a raging gale, but I believe that a new, forced global system predicated on lies and sociopathic deceit is destined to sink into the boggy filth of mendacious corruption that comprises its foundation.

And indeed, it’s already failing: getting everybody accustomed to endless jabbing and submission to the transhumanist-nanotechnology global surveillance state that vaccine passports auger turns out to be nowhere near as eagerly embraced as the orchestrators of this evil had planned.

Too many people across the world are either refusing to have the jab altogether, or refusing booster shots. Hence the increasing rage and frantic threats of our “democratically elected” dictators (and their occult handlers) toward those of us who have become refuseniks.

Buckle up, everyone; it’s going to be a bumpy ride. But our all-knowing overlords are starting to panic, which wouldn’t be happening if everything was going according to their meticulously-crafted but profoundly mephitic (and psychotic) plan.