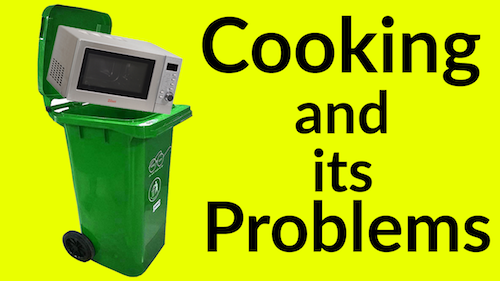 My translation of cooking and it’s problems

Dr. Seignalet called his diet variously “hypotoxic”, “ancestral” or “original”. The “Ancestral Health” movement is a broad church with “paleo” coming in many different creeds and denominations. Some versions shade off into (neolithic) Weston Price Foundation territory with consumption of raw milk and dairy and bone stocks positively encouraged. (Not Seignalet legal however). Others, (pace Voegtlin) are little more than the Atkins/ketogenic diet; just load up on plenty of cooked meat and green leafy vegetables and hold the carbs; all justified with much conjecture about what our paleo ancestors ate.

When exactly was that golden age when our diet was in perfect sync with our genes and what exactly was the diet of those supposed perfect human specimens? Maybe our diet never has been compatible in every degree with our genetic inheritance. For Irvin Stone for example, the wheels had already started coming off when one of our primate ancestors had a mutation whereby, unlike the rest of the animal kingdom, apart from guinea pigs, we could no longer synthesise vitamin c in our own bodies and had to rely on external supplies.

Raquel Welsh in a fur bikini – the “golden age”?

The supposed golden age is generally taken to be late paleo. With Raquel Welsh in a fur bikini, how could this be wrong? (Just kidding). OK, so we can reconstitute those coprolites (fossilized turds) and carbon date them and we know that they contain meat and 2 veg. We know the veg was leafty greens, so no doubt raw but what about the meat? Was it cooked or raw? Eaton and Konner said nothing on this subject in their 1985 paper.

French paleos. Is that a thing?

For French paleos (they don’t call themselves that by the way, I’m just using the word as shorthand) and Dr. Jean Seignalet, the answer is definitely raw. According to them, fire and cooking was a very late invention – what you could call a (very) “late paleo disease factor”.

At the time Eaton and Konner published in the New England Journal of Medicine, Jean Seignalet was already sitting in his Medical faculty library in Montpelier, scouring every possible French or English language journal or book to find the building blocks for his dietary theory. The foundations were down and the scaffolding was up and Eaton and Konner’s article came in handy for some of the brickwork. By 1988, Seignalet was up and running and already treating patients with his diet with a first success in reversing Rheumatoid arthritis in a female patient.

Eaton and Konner wrote this in 1985: “Ultimately of course, only experimental & clinical studies can confirm hypotheses about the medical consequences of dietary choices”. Only 3 years later, Seignalet was embarking on those studies and 20 years later, he had treated two and a half thousand patients with 115 different diseases, 91 of them successfully, with his diet. After Seignalet, the “paleo diet” is no longer a lifestyle choice for jocks and others interested in improving their health and vitality. It is now a fully fledged clinical tool for reversing disease. Nutrition is the first medicine. (Just don’t throw anything on the barbie ok?)

So here is an extract from Dr. Seignalet’s “doorstep” of a medical treatise. I have posted this passage up in particular because I think it provides some pretty strong arguments for not cooking, particularly at high temperatures and especially with meat and fish. (Thanks to the Seignalet family for giving me permission to translate it and publish it.)

(Note that Dr. Seignalet soon found that many patients found it difficult to eat only raw animal protein and as the real damage to these foods occurs above 110 degrees C, as you will see from reading this extract, in a spirit of pragmatism, he allowed patients to use low temperature, brief cooking techniques like steaming.)

It also gives a strong flavour of Dr. Seignalet’s methodology which is all about a meticulously constructed synthesis. All the evidence is considered, from cellular biology and microbiology to physics and chemistry to anthropology to
genetics to enzymes, to human physiology and anything else you could think of. It is all gathered in, pulled apart, examined and put back together like a giant, intricate piece of clockwork to form a perfectly functioning theory of how what we put in or bodies affects our health.

Cooking and its problems

Copyright maintained by the Seiganlet family for the original text in French. The translation is my copyright.