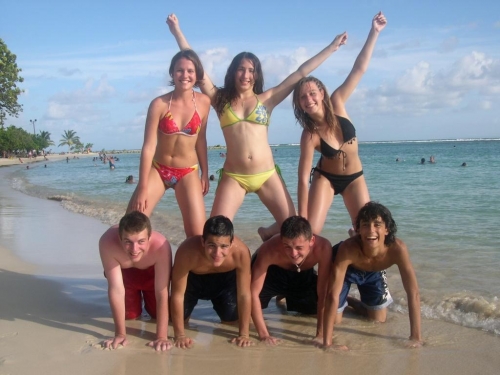 French teenagers on holiday in the South of France. (Campsite Coeur Caraibes)

Before I tell you a little bit more about Dr. Jean Seignalet, his diet and the thousands of remissions he achieved with it, I want to talk about how vitamin D could be affecting your health. Dr. Seignalet’s patients were all in lovely France of course and as he was on the French Riviera, a lot of his patients would have come from the South of France also.

In France, just before the second world war, a left wing coalition of communists and socialists called the “Popular Front” came to power. They brought in legislation whereby all employers in France have to pay for a month’s holiday for all their employees every year. You might think that this would be disastrous for France’s economy but it was extremely popular with the French population as is the 35 hour work week brought in in 2000. France comes to a standstill in August. Tourists in Paris have the place to themselves. Every summer the Paris mayor’s office closes the roads on the banks of the river Seine and ships in tons of sand to put on them so Parisians can pretend they are sunbathing on a beach (its called “Paris Plage” see image). In August the whole population is at a camp site either by the sea or in the mountains. They are out in the sun all day long. Many French people also ski at week ends and in the school holidays. What all this means is that most French people usually have a tan, which means they are getting adequate levels of vitamin d. So for Dr. Jean Seignalet and his French patients, vitamin D deficiency would not have been much of an issue and it is not mentioned in his book: “Nutrition the Third Medicine”

Since the 1980’s, some in the medical establishment have been running a campaign to keep us out of the sun in order to avoid skin cancer. The (British) NHS website has a whole page trying to scare us from letting a single ray from the sun get anywhere near our poor defenceless skin, including this “…Sun damage doesn’t just happen when you’re on holiday in the
sun. It can happen when you’re not expecting it, for example when you go for a walk or sit in your garden….” Yeah, So make sure you stay locked up in your house in the summer holidays. Draw the curtains and whatever you do, don’t go on holiday. You will be taking your life in your hands! Get your dog put down because all those walkies add up and you can’t afford to risk it. Oh please. For God’s sake!

Here is a more measured view:

“Today, there is a controversial debate in many scientific and public communities on how much sunlight is appropriate to balance between the positive and negative effects of solar UV-exposure. UV exposure undoubtedly causes DNA damage of skin cells and is a major environmental risk factor for all types of skin cancers. In geographic terms, living in parts of the world with increased erythemal UV or high average annual bright sun (Chris’ note: the UK definitely does not qualify here!) results in increased risks of skin cancers, with the greatest increased risk for squamous cell carcinoma, followed by basal cell carcinoma and then melanoma. On the other hand, sunlight exerts positive effects on human health, that are mediated in part via UV-B-mediated cutaneous photosynthesis of vitamin D. It has been estimated that at present, approximately 1 billion people worldwide are vitamin D-deficient or -insufficient. This epidemic causes serious health problems that are still widely under-recognized. Vitamin D deficiency leads to well documented problems for bone and muscle function. There are also associations between vitamin D-deficiency and increased incidence of and/or unfavourable outcome for a broad variety of independent diseases, including various types of malignancies (e.g. colon-, skin-*, and breast cancer), autoimmune diseases, infectious diseases, and cardiovascular diseases. In this review, the present literature is analyzed to summarize our present knowledge about the important relationship of sunlight, vitamin D and skin cancer. “(underlines are my emphasis)

*Note that the authors consider vitamin D deficiency as a cause of cancer. Remember: vitamin D is created by your body when UV rays from sunlight hit the skin. So by staying out of the sun you may actually be more likely to get skin cancer! I think that the truth may be this: skin cancer is caused by dietary factors (Dr. Seignalet’s patients had a fraction of the cancers that epidemiology studies for the general population would have predicted – see his “clogging disease” tables) , vitamin deficiency from lack of sunlight on the skin, and when these two factors are in place, sunburn may be a contributory, triggering factor. Dr. Hollick says that a tan (or a dark skin) protects the skin from sunburn. So if your skin is white from lack of sun exposure, your initial exposure for one day should be just 15 minutes or so and you should build up slowly until you have a tan which will protect you.

Here is what the acknowledged expert on vitamin D, Dr. M.F. Holick says:

“Vitamin D deficiency is now recognized as a pandemic. The major cause of vitamin D deficiency is the lack of appreciation that sun exposure in moderation is the major source of vitamin D for most humans. Very few foods naturally contain vitamin D, and foods that are fortified with vitamin D are often inadequate to satisfy either a child’s or an adult’s vitamin D requirement. Vitamin D deficiency causes rickets in children and will precipitate and exacerbate osteopenia, osteoporosis, and fractures in adults. Vitamin D deficiency has been associated with increased risk of common cancers, autoimmune diseases, hypertension, and infectious diseases. A circulating level of 25-hydroxyvitamin D of >75 nmol/L, or 30 ng/mL, is required to maximize vitamin D’s beneficial effects for health. In the absence of adequate sun exposure, at least 800-1000 IU vitamin D3/d may be needed to achieve this in children and adults. Vitamin D2 may be equally effective for maintaining circulating concentrations of 25-hydroxyvitamin D when given in physiologic concentrations. “

You can read the full text here

(If the English subtitles don’t come on, click on the gear symbol)

Important note: do not supplement with tincture of iodine – it’s a poison

and this one Stop the Thyroid Madness

Your thyroid is the master gland and it requires adequate iodine to function. Make sure you know all about how the thyroid works and make sure you are not hypo-thyroid.

Here are some links (for mobile users) to buy the Seignalet daughters’ book which I translated. I’m writing my own book on how to follow the diet. It will have lots of my own lovely recipes.

A word about Salt

Dr. Seignalet whose book was aimed at the French, thought that the French ate 4 times too much salt. In the English speaking world we probably eat even more. He also advised to use sea salt rather than processed, table salt. This is all very well, but table salt is iodized by law. Before this, goiters were endemic. Especially in inland areas of the US, the famous “goiter belt” where soils have no iodine. So by all means reduce your salt intake and by all means replace table salt with proper sea salt. But make sure you get some Lugol’s iodine and take 4 drops a day in water. Proper sea salt should be grey. If it’s white that means it has been processed and lost valuable minerals. You can buy “Gros sel de Guérande” which is the real deal, on Amazon.

Freeze your Fish, Meat and Charcuterie/Salami

Fish, meat and eggs cooked at high temperature are a disease factor according to Seignalet. He advocated eating raw. He found that many patients could not eat raw. He says that beef can be eaten blue and fish can be steamed. Chicken must be cooked through thoroughly of course. Cut the chicken into small pieces and cook in a pan with some virgin coco nut oil on a fairly low heat until the chicken is cooked right through. Eggs can be eaten soft boiled or as a runny omelette. It’s very unlikely that eggs would ever contain parasites so if you want to eat eggs raw, go ahead. I personally eat 3 raw eggs in smoothies. Seignalet did not seem to be aware that freezing kills parasites. In my opinion, eating raw fish or meat without freezing it is extremely dangerous because they can contain parasites and there are three things you should know about parasites: 1. They are very hard to detect. 2. They can seriously damage your health. 3. The medical profession do not take parasite infection seriously in my opinion. Probably because parasites are hard to diagnose.

Cured meats and fish such as salami, saucisson, jerky, smoked salmon, viande des Grisons, bresauola, etc are all cured. Curing should kill any parasites. However, according to the FDA, curing is not 100% guaranteed to kill all parasites. Therefore, put your cured meats or fish in the freezer also.

According to the FDA (who I have maligned elsewhere on this site!), freezing at -20 C for a week will kill all parasites. A home freezer works at -20 C. You might just want to buy a proper freezer thermometer just to make sure.