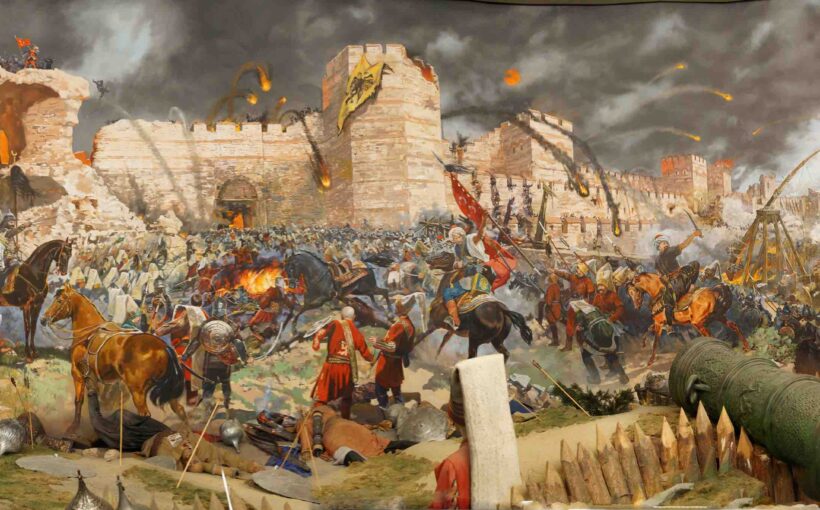 Final assault and the fall of Constantinople in 1453. Captured by Mehmet. Diorama in Askeri Museum, Istanbul, Turkey

Throughout the medieval period the hunt was on to find original manuscripts from antiquity, especially the Greek originals of texts by Hippocrates and Galen, in the monasteries dotted throughout Europe where ancient books and scrolls had survived. The great humanist and outstanding scholar of Latin and Greek Guarino da Verona discovered many lost Greek and Latin manuscripts. One such work was an isolated manuscript: “de Medicina” by the Roman author Celsus thought to date from about 25 to 50 BC discovered by Guarino in 1428, This is thought to be part of a lost encyclopaedia. Celsus may or may not have been a practising physician. The chief interest of this text at the time was its elegant, classical latin which must have seemed like a breath of fresh air when contrasted with garbled translations made by people for whom Latin was a language acquired by study and scholarship, centuries after it had ceased to be the spoken language of everyday. The first, printed edition was in Florence in 1478.

Celsus, in contrast with Galen who listed remedies in relation to their effect on the humors, listed his remedies for the specific effect: diuretic, purgative, emetic, narcotic etc. These remedies were called “specifici”.

1453 Fall of Constantinople. Many Greek scholars come to Italy.

Along with increasing scholarship in Greek and Latin studies, searches were made in all the monasteries for ancient Latin and Greek manuscripts. These searches were actively encouraged by the popes. As many original manuscripts were brought to light for the first time, it was possible to compare them with the Arabic translations of these texts and it was discovered that there were many mistakes and mistranslations in the Arabic texts. This led to a growing dissatisfaction with the Arabic medicine.

Theodore Gaza becomes professor at Greek at the newly instituted University of Ferrara. Ancient Greek manuscripts are discovered at the Vatican and the pope asks Gaza to translate them into Latin. Theophrastus’ Enquiry into Plants and his medicinal treatise in book 9 was virtually unknown until the fifteenth century when Greek manuscripts were discovered in the Vatican and the pope asked Theodore Gaza to translate them into Latin. The Enquiry into Plants was translated into Latin and published at Treviso in 1483. This led to a critical reappraisal of Dioscorides and Pliny’s pharmacopias.