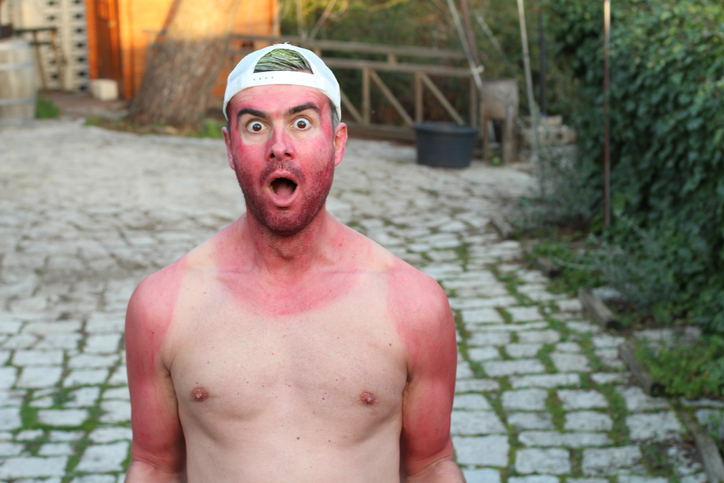 In this video I give you 13 tips for safe tanning.

Bear with me – I’m still writing this page.  I’m researching vitamin d receptor polymorphisms.   Very interesting!  Come back in a day or two to read it.

Folate has a protective effect on skin DNA. So make sure you eat plenty of green leafy vegetables and avocados to make sure you get plenty of folate when you are exposed to the sun or tanning beds. Don’t take folic acid supplements. Folic acid is a synthetic vitamin which is not metabolised in the same way as folate. So natural folate has an anti-cancer effect. Synthetic folic acid may have a pro-cancer effect. Jump to study 1. and Jump to study 2.

Vitamin c and e protects the folate in the skin from oxidation. So eat plenty of avocados and spinach for the vitamin e as well as the folate. Extra virgin olive oil is also a good source of vitamin e. Jump to study 3.

Don’t drink lots of orange juice for the vitamin c. It contains furanocoumarins which are phototoxic.

Take vitamin k2 with your vitamin d or UVB exposure

Vitamin d should be taken with vitamin k2 as well so that calcium ends up in the right places, mainly the teeth and bones.  Jump to study 6.

If you have very fair skin and are planning on going somewhere sunny on holiday or using my tanning bed, I recommend taking a high dose of vitamin d for a couple of weeks before hand. I think 10,000 i.u’s. per day for a couple of weeks should give you good protection for your skin. If you have a medical condition you probably need more but avoid UV exposure if you take immune suppressive drugs or phototoxic drugs. (Watch my videos and read my blog posts on how to use my supercharged version of the Seignalet diet to reverse your disease and come off the drugs)

Ergothionene in shiitake mushrooms is protective

Another thing which is protective is miso soup. Have it at the end of your meal. Follow my recipe which uses shiitake mushroom for stock. Shiitake is rich in ergothioneine. It prevents oxidation of the folate and repairs UV damaged DNA and  Jump to study 7. The Japanese eat miso soup at the end of every meal. Melanoma is virtually unknown in Japan Jump to study 8. although skin cancers in general are increasing as some Japanese adopt hitherto unknown parts of the Western diet like dairy and cheese and Kentucky fried chicken. . Jump to study 9.   (Note: you can also take ergothioneine as a supplement but why forego the pleasure of eating delicious miso soup with all its myriad health benefits?)

What happens when you tan?

The 2 types of Ultra Violet light

There are actually 3 types of ultra violet radiation. UVC, UVA and UVB. UVC is extremely harmful but is filtered out by the earth’s atmosphere so does not concern us.  (It should concern you if you do welding because UVC is produced).  UVA is ubiquitous.  As long as there is daylight there is UVA.   UVB producing vitamin d on the other hand is only present at certain times of the year and certain times of day above a certain latitude.

Latitude and time of day affect availability and dose of UVB

At latitudes below 35 degrees you are getting UVB all year round.  So this includes Los Angeles and most of Texas.  Nowhere in Europe gets UVB all year round but in the southern most tip there is probably only one month where there is no UVB.  The northern most part of Sweden get UVB only during 4 months in the height of summer.

In the UK we get UVB from around March to October but this will vary of course according to where you are in the UK.   Then there is the question of time of day.  In the UK  we only get UVB in the afternoon. Here is an easy rule of thumb to know if you are getting vitamin d stimulating UVB.  If your shadow is shorter than you, you are.  If it’s longer than you, you’re not.

Different effects of UVB and UVA

UVA penetrates as far as the second skin layer,  the dermis while UVB penetrates only into the first layer,  the epidermis.   UVB stimulates the production of melanin by the the melanocytes to produce a deeper tan while UVA alone oxidises the melanin to produce a superficial tan.

High alcohol consumption particularly of white wine is a melanoma risk.  Binge drinking is associated with increased number of sunburns.  Whether this is because the drinkers are more careless about  exposure to peak amounts of UVB under the influence of alcohol or whether there is a metabolic effect such as lowered protective folate in the skin is not evident.  Probably both.

Erythema is the fancy medical term for sunburn.   Sunburn occurs a few hours after the exposure.  Sometime this can be as much as 24 or 48 hours later.   You should become as aware as possible of a) times of day, season and weather conditions when UVB radiation is high and b) how this affects your skin, particularly if you are blonde or red haired and calculate your MED. You should then limit your sun exposure at times of peak UVB to half of your MED.

If you visit a tanning salon the staff will have been trained to be able to calculate what your MED is according to the salon’s equipment and your skin type and will not let you stay in the bed long enough to get burned  .  You should never be red and burned after a visit to a tanning salon.  My home tanning bed that hangs on a door (see side panel) comes with a Daavlin patch which will enable you to calculate your MED safely without needing to get burned.  See it illustrated in the video.

This page is not finished. I need to investigate vitamin d receptor polymorphisms (they are implicated in melanoma as well as many diseases) and folate metabolism polymorphisms, also implicated in Melanoma. How to know if you have these and what to do about it. (Written on 9.2.21. come back in a few days time)

The first “modern humans” evolved in Africa around 200,000 thousand years ago. These ancestors produced only Eumelanin and needed a comparatively large amount of it to protect their skin from the strong African sun. I think that as these early modern humans crossed over into Europe and Asia about 45,000 years ago or earlier, they would have eaten lots of oily fish like trout and Salmon caught in the then pristine rives. I think that they would have gorged on Salmon during the spawning season and this may have given them enough vitamin d in their fat stores to make up for a shortfall caused by a genetic melanin maladaptaion to the sun in more northerly climes. Particularly as Salmon spawn during the winter when vitamin d producing UVB does not hit the earth in northern Europe and it’s reduced in southern Europe.

Folate and Its Impact on Cancer Risk
Pieroth et al 2018.

“…Folic acid, found in fortified foods and supplements, is converted to tetrahydrofolate in the liver by dihydrofolate reductase (DHFR). It has been reported that folic acid in excess of 400 mcg may saturate the DHFR enzyme, resulting in unreduced folic acid, which has been hypothesized as a potential mechanism for carcinogenesis…”

“…In 2008, the European Food Safety Authority (EFSA) convened a working group to consider whether there was enough evidence to recommend a full risk assessment to determine whether folic acid was causing cancer, especially colorectal cancer. The EFSA concluded that, “there are currently insufficient data to justify such an assessment and that current evidence does not show an association between high folic acid intakes and cancer risk but neither do they confidently exclude a risk…”

Protective effect against sunburn of combined systemic ascorbic acid (vitamin C) and d-alpha-tocopherol (vitamin E)/
Eberlein-Konig 1998
“…Combined vitamins C and E reduce the sunburn reaction, which might indicate a consequent reduced risk for later sequelae of UV-induced skin damage. The increase of sunburn reactivity in the placebo group could be related to “priming” by the previous UV exposure….”

Vitamins D and K as pleiotropic nutrients: clinical importance to the skeletal and cardiovascular systems and preliminary evidence for synergy
Kidd 2010
“…Vitamins D and K are lipid-phase nutrients that are pleiotropic – endowed with versatile homeostatic capacities at the organ, tissue, and cellular levels. Their metabolic and physiologic roles overlap considerably, as evidenced in the bone and cardiovascular systems…”

href=”https://pubmed.ncbi.nlm.nih.gov/19439218/#:~:text=The%20cellular%20defense%20system%20against,activities%20and%20small%20nonenzymatic%20molecules.&text=Our%20results%20suggest%20that%20L,in%20the%20UV%2Dirradiated%20cells.”>Skin cells and tissue are capable of using L-ergothioneine as an integral component of their antioxidant defense system.
Markova et al 2009
“… Our results suggest that L-ergothioneine not only prevents oxidative damage but also may enable DNA repair in the UV-irradiated cells. The diminished oxidative damage to cellular constituents limits the apoptotic response and results in increased cell viability. The cells’ ability to take up, accumulate, and utilize the potent antioxidant L-ergothioneine positions this naturally occurring amino acid and its receptor/transporter as an integral part of the antioxidative defense system of the skin….”

<href=”http://www.ghrnet.org/index.php/JT/article/view/1666/1900#:~:text=The%20annual%20incidence%20of%20malignant,employing%20the%20vital%20statistics%20data.”> Epidemiology of Skin Cancer in Japan
Nishi
“…The annual incidence of malignant melanoma in Japan is 11.2 per million persons, but that of white Americans is 243 per million]. In this article, the recent changes in the mortality from skin cancers in Japan are reported, employing the vital statistics data…”

The Role of the Japanese Traditional Diet in Healthy and Sustainable Dietary Patterns around the World
Gabriel et al 2018
“…In the last forty years, there has been a partial loss in traditional food culture among the Japanese population. They have taken up less healthy dietary habits, such as skipping breakfast, insufficient vegetable intake and excess fat intake, combined with an increase in consumption of meat, eggs, milk, and dairy products…”

“…the results of the present study do not prove a direct causal effect of sun exposure on melanoma prognosis, as additional confounding factors, including vitamin D serum levels, may have a role….”

“..Folate is proposed as a cancer prevention target for its role in providing precursors for DNA repair and replication, as well as its ability to promote genomic integrity through the generation of methyl groups needed for control of gene expression. The cancer prevention potential of folate has been demonstrated by large-scale epidemiological and nutritional studies indicating that decreased folate status increases the risk of developing certain cancers…”

Alcohol Intake and Risk of Incident Melanoma: A Pooled Analysis of Three Prospective Studies in the U.S