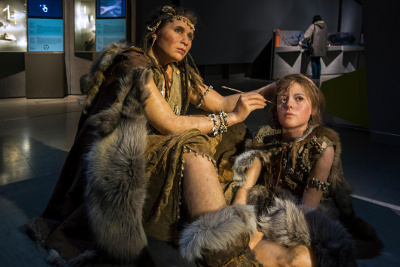 In 1868 in Southern France about 100 miles inland, due east from Bordeaux, in Cromagnon in the Dordogne, five fossilised skeletons were found in a rock shelter by a geologist. These remains were clearly early “modern” humans, homo sapiens. Since then, more and more remains have been discovered in Europe, Asia and the American continent and the very earliest have been carbon dated to 45,000 years ago. The location of the first remains at Cro-magnon has given the name to these early humans (although the proper scientific name is European Early Modern Humans or Early Modern Humans).

Scientific techniques, especially in the last 20 years, have allowed us to learn more and more about them. We can learn an astonishing amount about their diet from coprolites (fossilized faeces) which can be soaked in sodium biphosphate to reconstitute them for microscopic analysis. From their bones and teeth we can learn about their health, at what age they died and often, what caused their death. Recently scientists have even been able to gene sequence their DNA and a recent discovery, thanks to recovery of DNA recovered from remains and gene sequencing shows that some of them bred with Neanderthals, an early human species which died out, and that we all have some Neanderthal DNA in us.

A light bulb may by now have been switched on and you are thinking:
“Oh, the paleo diet, I know all about that”. You may even eat the Cordain/Wolf way yourself. Whoa, hold your horses. We are not there yet. We are going to a slightly different destination. So bear with me, even if you know all this stuff.

What has this got to do with my condition?

Bear with me, all will be explained.

getting more and more devoid of real nutrients until the present day when most of what we eat is just artificially flavoured garbage.

The US FDA, the UK Food Standards Agency, The WHO – all think that we are stupid

Now, in 2019 (when I revised this blog entry) we are told by the WHO (World Health Organisation) and regulatory bodies that are supposed to be protecting us – like the FDA in the US and the Food Standards Agency in the UK – that food irradiation is the best thing since sliced bread. Exactly how dumb do they think we are? As a sop to what they claim is our irrational opposition, food that is irradiated is supposed to be labeled as such. Is this labelling being enforced? What do you think?

It’s a wonder we can still manage to drag ourselves around! Try this, watch some footage of crowds at various times of the twentieth century. Notice something? The people in the crowds look sicker and sicker and more and more obese, the closer they are to our own times. (I will find some stock crowd footage on youtube and embed them in a blog page showing this when I have time.) So much for the miracles of modern medicine. As we are genetically identical to them, the difference between this race of the superhuman caveman and ourselves can only be due to diet.

These are reconstructions based on actual remains. This is how this paleolithic mother and daughter would have looked in real life. Look at the superb bone structure of the faces and how sturdy the heads and bodies are. No signs of acne, eczema, or psoriasis either, just clear skin. Just kidding around with the second bit.

“A description of an Indian Squa (sic)

The Men are somewhat Horse Fac’d, and generally Faucious, (sic) ie. Without Beards ; but the Women many of them have very good Features ; seldome without a Come to me, or Cos Amoris, in their Countenance ; all of them black Eyed, having even short Teeth, and very white ; their Hair black, thick and long, broad Breasted ; handsome streight Bodies, and slender, considering their constant loose habit : Their limbs cleanly, streight, and of a convenient nature, generally, as plump as Partridges, and saving here and there one, of a model deportment ….”

Is this site an advert for Cordain/Wolf Paleo?

Eaton and Konner’s article in New England Journal of Medicine

1. Eaton and Konner make no reference to cooking. Cordain and Wolf assume that Early Modern Humans were cooking their meat, which means grilling it over a fire. But for Seignalet, cooked meats and especially grilled meats are a dangerous disease factor. You can see my translation of his chapter on the dangers of cooking on my blog.here

“……Fire was invented about 400,000 years ago. However, there is absolutely no proof that fire would have been used to cook food before a recent period, 10,000 years ago. Furthermore, analysis of fossilised faecal remains show that during the Mesolithic, humans ate raw. So we can assume that cooking was little used or not used at all……”

3. Eaton and Konner wrote this in their 1985 article: “Ultimately of course, only experimental & clinical studies can confirm hypotheses about the medical consequences of dietary choices”. Dr. Seignalet took them at their word and only 3 years later, Seignalet was embarking on those studies and 20 years later, he had treated two and a half thousand patients with 115 different diseases, 91 of them successfully, with his diet. With the greatest of respect, no-one in the field of nutrition or medicine in the English speaking world has ever set out to prove their dietary theories like this. They may talk the talk but they don’t walk the walk. To my knowledge only the Russians have done anything similar, with their research on fasting.

See my blog article on fasting